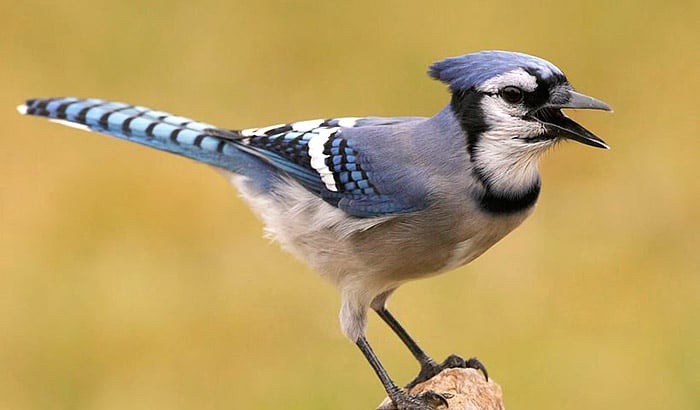 Blue jays are known for their intelligence, but their ability to entertain while in the backyard is also worth watching. These birds also like to eat and will never leave your garden as long as they are supplied with enough bird food. These birds are also known for being noisy, and some people think that these birds always scream.

So, why do blue jays scream? The noise that blue jays are creating is a form of communication. It can be loud, which makes others think that they are screaming, but that is their natural way to communicate with other birds. Other reasons for this unique blue jay habit will be discussed in this article.

Why Do Blue Jays Scream

It may look and feels like the blue jays scream, but it is just their natural form of communication. These birds will talk about different things, and the sound they produce may be too loud, but it is normal for them to communicate that way.

One way that blue jays communicate with each other is when they alert other blue jays of the presence of predators within the area. They communicate so loud that you will probably hear them screaming.

The predators can be the presence of humans on their territory or other predators such as cats, snakes, or other birds. When the blue jay recognizes a predator, it will immediately inform the other birds so that they can be alerted and prepare themselves for possible attacks.

Another form of communication that the blue jays like to do is when they tell others of possible food sources in an area. Usually, they scream to other birds so that they can flock together to notice other members of the flock of the presence of food nearby.

I have witnessed a group of blue jays screaming when I put new bird food in the feeders. After a while, you will notice that more blue jays will come to share and eat the foods I provide in the feeder.

Bird enthusiasts and birders consider blue jays as natural noisemakers. Meaning, once they are in your backyard, they create sounds or noises that resemble a scream. The reason behind it is that blue jays have a collection of various calls.

Expert birders have probably recognized the alarm call they made, but there are other calls that they usually do. The charming bell call for the blue jays is used to communicate with its mate and other family members. Parent birds usually use a whisper call when they are in their nest.

But the most significant feature that these noisy birds have is their ability to imitate the sounds of their predators. Blue jays use this unique ability to copy the sounds of a winged predator to scare and chase other birds or even squirrels in the bird feeder.

There are also instances when a flock of blue jays will come into your backyard while screaming the sound of a hawk. Their ability to imitate sounds is maximized to scare other birds. Once the birds will be scared, they will have the feeder all for themselves.

You will probably see the blue jays nesting during the summer, and they are very secretive during the season. But in the fall, expect many familiar to form a flock to migrate to new places. The fall will be the time that you will hear the blue jays scream more because that is their way of communication.

During this time, they will be in constant communication for new discoveries, food, and the presence of possible predators. They are also expected to scream when they greet relatives, old neighbors, and other acquaintances.

Why Do Cockatiels Scream

Another bird that is known to scream is the cockatiel. These birds sometimes will let out a high-pitched screech, making them look like they are screaming. But what is the meaning of this screaming call?

Cockatiels are friendly animals, and one way to get that attention is through screaming. When they are feeling upset, sad, or even scared, the cockatiel uses the screaming sound to get the attention of the other birds.

When a cockatiel is sick, there is a higher probability that it also screams. The sickness can be a result of malnutrition or suffering from illness. If you notice that the bird is also fond of sleeping, has watery eyes, and does nothing while screaming, it is probably because the bird is not feeling well.

Suppose a cockatiel screams while in the cage; the bird is probably lonely. This situation usually happens when the pet owner is too busy and reduces the amount of time spent with the birds. The cockatiel usually screams because the bird is just trying to voice out its frustration and boredom.

Why do blue jays scream? There are many reasons behind it, but it is primarily because screaming is their form of communication. Blue jays are considered nature screamers so they can produce different types of calls that resemble a scream. Cockatiels also have similar screaming sounds that come with various reasons for doing so.