The western and easter meadowlark are considered almost identical birds. Meaning they share a lot of similarities with each other and look the same. However, these two bird species are officially two different species which means they also have some differences.

The most obvious difference is in the malar region, which is the area of the sides of the bird’s head located behind and below their eyes. You will find a yellowish malar region for the western meadowlark, while the eastern meadowlarks come with buff and whitish malar stripes.

Related:  What Does a Dead Bird Mean?

Overall, the physical appearance of these two birds is entirely different. The western meadowlarks tend to be paler than the eastern meadowlarks. This appearance is the result of the thinner lines of the blacked-colored folded wing feathers.

You can also differentiate these two birds by the call or vocals they made. The eastern meadowlark comes with a clear, melodic whistle, while the western meadowlark’s song tends to be long and flute-like.

Meanwhile, the western meadowlarks produces a buoyant and flutelike melody that can be heard across a field. They say that a western meadowlark is easily seen and recognized by the sounds that they produce instead of seeing them directly.

It would be best if you also took note that eastern and western meadowlarks only recognize the songs of their species. This situation means that the songs produced by eastern meadowlarks are not recognized by their western counterparts and vice versa. 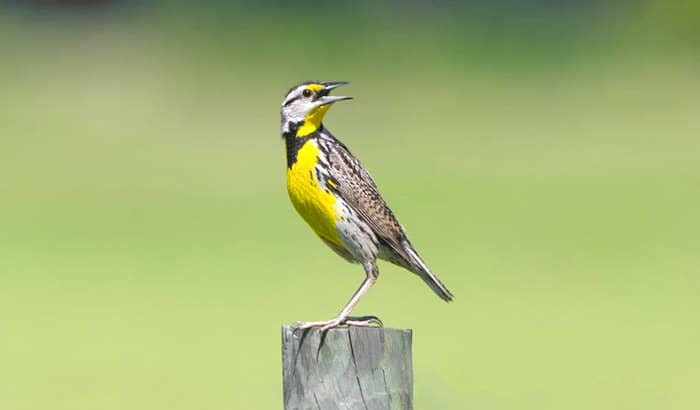 You can also tell the difference between these birds from the region in that they are observed. The western meadowlarks are found from the eastern border of the plains and prairies to the pacific coast. On the other hand, the eastern meadowlarks live in the southwest and eastward from the prairies of the Midwest and Canada to the Atlantic Coast.

Experts have discovered that the eastern and western meadowlark ranges sometimes overlap in Central America. But what is impressive is that these two bird species refuse to share territories.

Since they sing totally different songs and do not recognize the songs that they produce, the sounds cannot be used in their communication. This situation often results in the two species fighting each other when it comes to claiming territories.

You can also differentiate between these two birds by the way they visit a backyard of a birder. The western meadowlark is not considered a regular feeder visitor. Although they sometimes visit feeding stations in open habitats.

The male western meadowlarks are considered monogamous by nature, but they do not mate for life. On the other hand, a male eastern meadowlark typically has two mates at a time. Although some have three mates, it is rare.

Related:  Male vs Female Hummingbirds (How to Tell Them Apart)

Although these two bird species are almost identical, it is very rare that these two birds mate and produce a hybrid bird. It usually occurs at the edge of their respective ranges but rarely happens. When it happens, it is probably because few mates are available.

Comparing western vs eastern meadowlark can be challenging because they are almost identical. Experts said you need binoculars to see the difference between these two bird species clearly. However, these birds can also be differentiated by their songs and the location where they are usually observed. If you want to learn more about other birds, we also have a guide for Wood and Hermit Thrush.