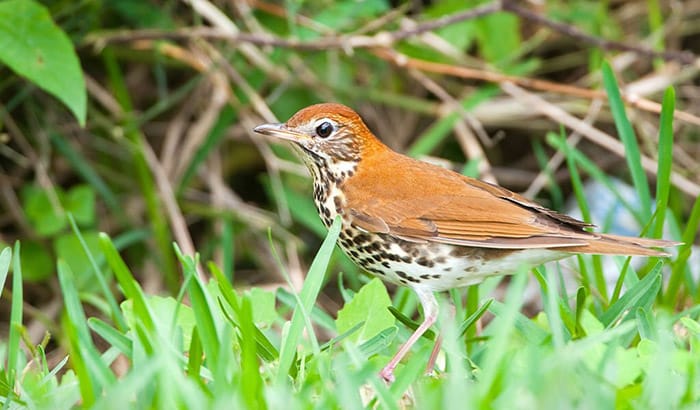 Thrushes is known for its beautiful colors and singing ability. Although very hard to attract, these bird species will provide excellent views and beautiful sounds to the birder once they are in the garden. Two popular thrushes will be compared in this article, the wood thrush vs hermit thrush. We will tackle their differences to allow birders to differentiate each bird species.

The hermit thrush is considered one of North America’s most widely distributed forest-nesting migratory birds. There are 12 subspecies being recognized with this bird type which can be found in its extensive breeding range.

You can easily spot a hermit thrush on the ground with its unique habit of quickly raising and slowly lowering its dominantly red-colored tail. These birds, when perched, tend to flick their wings but not continuously as the other birds.

Thrushes are also known for being a monogamous territorial species in many locations. In their migration destination, the male thrushes usually will mark their breeding territory through singing. During the migration, these birds travel during the night with a strong and direct flight action.

The wood thrush is known to many as an excellent singer that can be heard throughout the eastern U.S. forests during the summer. However, this bird species is being threatened, and their declination is caused by the destruction and the fragmentation of forests.

Physically, this bird species comes with a robust and long-legged form. Most of its parts, such as the back, wings, tail, and head, are reddish and brown. People call these birds swamp angels, song thrush, and wood robins.

Being an excellent singer, this bird actually sings a three-part song where the male thrushes and sings pairs of notes at the same time. This action allows excellent harmony and blending to produce a lovely song.

Unfortunately, the sightings of these birds are declining. Apart from forest destruction, these birds have already reduced their breeding success in smaller forest patches. There are two reasons why it is happening. One is parasitism, and the other is nest predation.

These two thrush species can be differentiated using several factors, which are listed below

Wood thrushes can be recognized physically with the white-colored blackspots found on the underparts. Up above, these birds are dominated with a warm reddish-brown color. In addition, young wood thrushes come with a duller version of the color pattern. Wood brushes also come with bold and white eyering.

On the other hand, the underpart of the hermit rush is paled with unique spots found on the throat. You will also find smudged spots on the breast part and rich brown color on the head and the back. You will also see a warm reddish color on the tail.

Wood thrushes are very isolated birds as they jump from one leaf debris to another on the forest floor looking for insects. They also like to move up and down and do digging and leaf-turning in between. The male wood thrush will provide a very clear and flute-like song that will echo in the forest during the spring and early in the summer. These birds, regardless of sexes, will also make very unique gun-like notes.

On the other hand, hermit thrushes tend to jump and drag leaf debris while looking for food. These birds usually perch very low in the ground, usually in fallen logs or shrubs. These birds can also be found on trails and forest clearings.

The wood thrush usually breeds in mixed and broad-leaf forests, which are usually found in the eastern part of America. These places usually come with large trees, shade, and an abundance of leaf debris which is perfect for foraging. During migration, they usually spend their time in lowland tropical forests in Central America during the winter.

Meanwhile, hermit thrush is usually found on forest understories, specifically around openings or edges. They can also be found in boreal and mixed forests.

Wood Thrush comes with an upright posture and a pot-bellied body. It also comes with a big head, a short tail, and a straight bill. On the other hand, hermit thrush also stands upright but comes in a chunky shape. They also have a slightly raised slender and straight bill. In terms of the size, please refer to the table below: