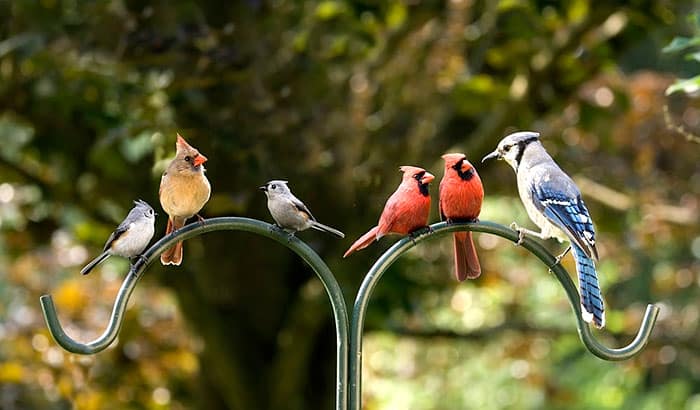 Cardinals are songbirds known for their red-coloured feathers, especially males. However, not all red birds are cardinals, as other species of birds come in red color. But how do you differentiate red bird vs cardinal? Let us find out below the different ways to identify cardinals from the other red birds.

The truth is, not all birds colored predominantly in red are cardinals. You just need to know the different color patterns in the body of a cardinal bird for you to differentiate it from the other red birds. First, you might look at the black color surrounding the beak of a cardinal that extends to the eyes and the throat.

Secondly, the red color does not cover the entire body of the cardinal. You will find that the reddish color is brightest in the bird’s cheeks, ears, and some parts of the breast, at the back of the bird and in the wings.

If you see a similar pattern of color in a bird, you are probably staring at a cardinal bird. If not, there are many other red birds on our planet, such as finches, vermilion flycatcher, red-headed woodpecker, red crossbill, and many more.

Cardinal birds are natural ground feeders. Meaning, they like to forage for food by hopping shrubs and trees on the ground. Also, they want to eat seeds, berries, snails, and insects. The young cardinals like to eat insects in their early days.

One way to differentiate a cardinal from other red birds is knowing its distinct behavior. For one, the way they move on the ground looks like they are hopping. Since they look for food on branches of trees, you will likely see them taking short flights more often.

Related:  27 Most Popular Birds in Missouri (With Photos)

These birds are also famous for fighting themselves when seen in the mirror because of their territorial character. But, they are also self-maintaining, which means you can see them bathing in bodies of water even during the cold season. They also tend to harden their bills by rubbing hard surfaces.
Reproduction Traits

The way they breed can also help differentiate cardinals from other red birds. Cardinals love to breed in trees and well-hidden shrubs. They are shy and secretive, which means they like to breed unseen from others.

Cardinal can lay around 2 to 5 eggs per breeding. Their eggs are smooth and a little bit shiny and cones in pale blue and greenish-white colors. You will also find purple, brown, or gray marks on the surface.

Cardinals are songbirds which means they can produce distinct sounds. Both males and females can whistle song rhythms, which are constantly repeated before being changed by another rhythm.

During the incubation period, female cardinals tend to sing from their nest to answer their mate or request food. The sounds they produce can also be about threats from a predator or answering back to their competitors.

Two birds that are often compared to each other are the cardinals and red robin. Both birds share similar characteristics but also have some differences. You often see these two birds in similar places, which is the reason why they are mistaken to be the same. But there are noticeable differences that should let you distinguish between a cardinal bird and a red robin.

The obvious difference should be the color. The red robin comes with an orange chest with a black head and gray back and some orange color in its underparts. Meanwhile, the cardinal is bright red for females and pale brown for its female counterpart.

Both the cardinal and red robin are songbirds, meaning they like to sing and produce beautiful sounds. Some birders are confused in distinguishing between the two, but there are obvious differences. The cardinals produce more melodic and slower sounds compared to chirper sounds produced by the red robin.

The red robins always come in large flocks, especially during the winter and fall. On the other hand, the cardinal sometimes comes in a family group that usually reduces to pairs during mating. 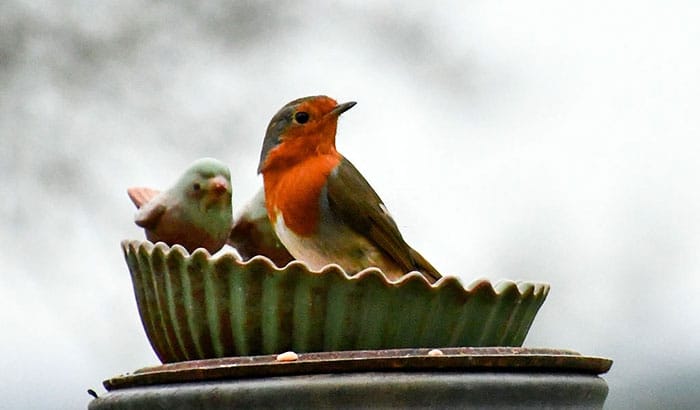 Cardinal birds are often mistaken as the red jay because the bird shares similar traits to the blue jay. A few years ago, I saw a blue jay and a cardinal perched on the same location, and I was amazed by the similarities they share physically.

Although they have different colors, their physical attributes look the same from a human perspective. If you are not familiar with birds and their names, you will probably feel that they belong to the same family of birds.