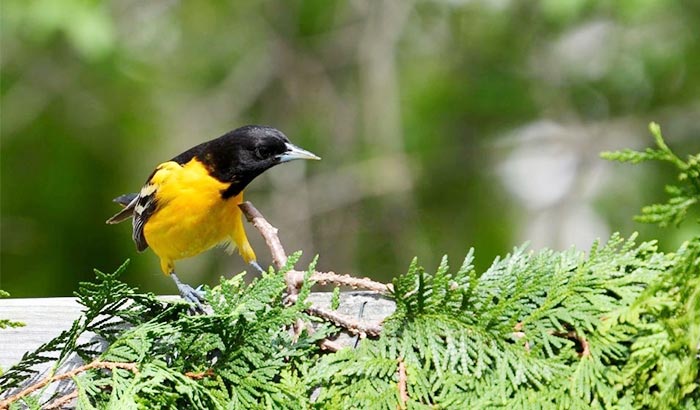 Determining the species of birds is challenging to the untrained eye. But sometimes, even experienced birdwatchers can mistake robins for orioles or vice versa because the two species are similar in many ways. This post focuses on robin vs. oriole; it explains the differences between the two bird species. I will explain their differences in size, shape, color variations, feeding habits, habitats, flight behavior, and songs they sing.

To help you better grasp their contrasts, here’s a table that compares the robin vs. oriole traits.

Let’s dive right into it.

Robin vs. Oriole: Examining Their Differences

Robins and orioles look similar due to both species of birds sporting an orange breast. And unfortunately, the birds will not sit on a branch long enough for birdwatchers to realize that the birds are not the same kind. But with the proper knowledge of what to look for, anyone can tell the differences between a robin and an oriole like an expert.

The sizes of robins and orioles are pretty similar; they are only two inches apart in length on average. Robins are bigger than orioles in overall size. They grow to ten inches in length. On the other hand, orioles grow to around six to eight inches in length, depending on the species.

But even if you don’t have the eye to determine the size of the orange-breasted bird you are looking at, you can still determine its species through other means.

The shapes of robins and orioles are distinctly different from each other. Members of the thrush family, robins are rounded and stout, which is typical of many birds in the thrush family. I even consider robins to be potbellied compared to orioles.

Orioles are slender. Because orioles are part of the blackbird family, they take the slim shape of the family.

The most confusing aspect of determining robins from orioles is that they feature a similar-looking color on their breasts. But the color variations outside that area are remarkably different.

In the case of robins, they boast a white patch on their bellies and beneath the tail. Even if the bird is in flight, you should be able to see this staggering detail.

On the other hand, orioles have consistent color from their breast to the area beneath the tail. There is no color variation on the entirety of their underside.

The color of the bills also indicates the bird species. Robins have yellow bills, but sometimes their bills are tipped in black depending on the season. Orioles have silver-black bills. 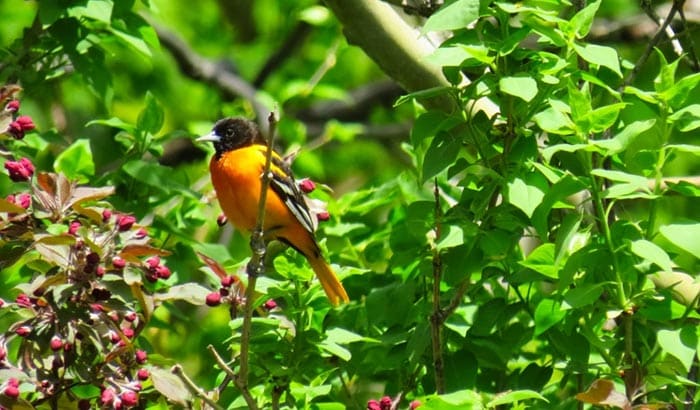 If you see an orange-breasted bird hopping along the ground, pecking away for worms, that bird is a robin. Robins are ground foragers who search for buried worms and insects. Even though their nests are on the branches of a deciduous tree – a tree that sheds its leaves every fall – they go to the ground for food.

Orioles also like to build their nests on deciduous trees. But they don’t go to the ground for food. They like to stay up in the trees and look for insects there. You are more likely to find an oriole high above the ground in the tree’s higher branches than you would near the bottom. Sometimes, the bird will go to the tree’s lower limbs for the fruits, but never on the ground.

Both robins and orioles prefer to sit and nest on deciduous trees. But even if the two species dwell in the same tree, you can still tell them apart through their different habitat preferences.

The primary difference is that robins prefer to sit and nest near the lower branches of the tree. Orioles prefer the higher limbs of the tree.

Another habitat difference is their geographic location. You will find orioles in the northern and central US during the summer. Near the winter, they will migrate south and west.

Robins are found all over the United States. Many of the birds will migrate to the southernmost states in the winter, but some will remain right where they are. So if you live in a northern state and see an orange-breasted bird in the winter, that’s a robin for sure.

Robins have a distinct flight pattern. They beat their wings quickly and glide shortly with wings closed. They fly speedily.

On the other hand, orioles like to take their sweet, leisurely time to fly from tree to tree. When they glide, their wings stay wide open.

Robins make the first sounds in the morning. Although they are technically songbirds, I don’t consider their song very musical. Their music sounds more like a chuckle of laughter. Additionally, they make sharp noises when alarmed. But when communicating calmly with each other, robins make mumbled “tuk” sounds.

Orioles are the more talented songbirds, in my opinion. Their song is a sweet, pure, whistling sound that is so similar to a flute. Their notes are full and rich.

Related:  27 Most Popular Birds in Missouri (With Photos)

1 thought on “Robin vs. Oriole (Tell Their Differences Like an Expert)”