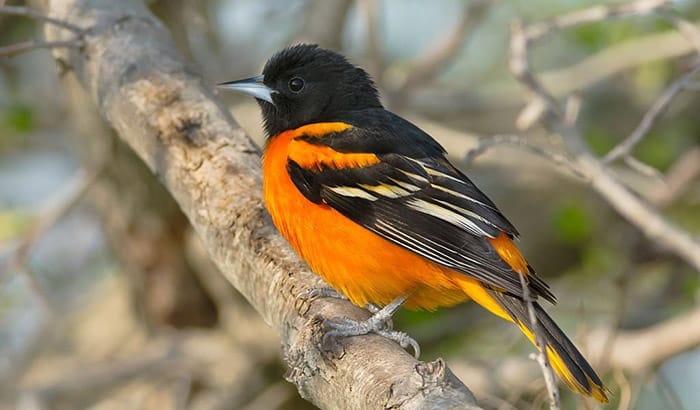 You will know that orioles are visiting your backyard because of their bright colors and magnificent vocals. This bird species is a member of the blackbird family where species are often compared because of their similarities: orchard oriole vs Baltimore oriole.

Baltimore oriole is more popular among the two. However, even with the lesser popularity of the orchard oriole, these two birds still share features that make them difficult to recognise. This article will know the difference between Baltimore oriole and orchard oriole in terms of physical traits, colors, size, and other factors.

The Baltimore oriole and orchard oriole are both migratory birds which mean they migrate during the breeding and non-breeding season. But what is unique about these two birds is that they share the same locations where they stay during the two seasons.

On the other hand, the orchard oriole is scheduled to arrive earlier in the tropics during the winter season but is expected to leave early for the breeding season. This information is important because these two birds share the same habitat during breeding and non-breeding seasons.

For the orchard orioles, the birds are expected to arrive in North America by late April and will start returning to the wintering ground by late August. It is expected that they will be back in Mexico and Central America in Mid-September, where they will stay for four and a half months during the breeding season.

In general, the overall size of the Baltimore orioles is bigger compared to the orchard orioles. It also has a longer wingspan and is heavier in weight. The table below will show the difference between the two birds in terms of size, wingspan, and weight.

The male Baltimore orioles come with black wings, heads, and back. However, there are some characteristics of bright oranges just below on their tails. The female and young Baltimore orioles are dull when it comes to their head parts. It shows some yellow color or pale orange, or just tan below.

The male and female Baltimore orioles come with strong white wing bars on their dark wings. Both sexes also come with pointed and sharp bills, which is expected when the bird species is a member of the blackbird family.

There is not much difference in the physical appearance of the orchard oriole compared to the Baltimore oriole. However, the lesser popular orchard oriole’s male counterpart comes with a deep-brownish red color in their tails.

Another difference between the two birds is the way they behave, particularly in their eating and nesting habits. Baltimore orioles love to eat fruit, which means any backyard birder can just put berries and other fruits to lure them into the backyard.

Their nesting habits are also unique since they like to hang and build their nest in mature trees near open areas such as farm fields, yards, and parks. It is also a fact that it will be rare to see a Baltimore oriole deep in the forest.

On the other hand, orchard orioles are like young woods or orchards that are located on forest edges. Unlike Baltimore orioles, you will rarely see orchard orioles in parks, yards, and other open spaces.

On the other hand, Baltimore orioles love to eat insects found in high trees. They also love to devour dark fruits if they are found in the garden. You can attract them by putting some fruits in the bird feeder.

Learning the difference between orchard oriole vs Baltimore oriole is an excellent knowledge to have as a birder. These two birds are almost the same, and the difference is very minimal. However, you can still find differences in their appearance, migration habits, behavior and other factors.