Most of the backyard birders agreed that two of the most unrecognizable birds, when they are standing side-by-side and being compared, are the least bittern and green heron. They are so similar in size, color, posture, and shape that many backyard birders will fail to recognize the two birds.

So, what is the difference between least bittern vs green heron? This article will try to distinguish between the two birds in terms of features such as size, color, and many more. We will compare them to enable bird enthusiasts to recognize both of these birds.

The least bittern is, in fact, the smallest heron in the world. On average, the length of this bird is from 28 to 36 cm, while the wingspan ranges from 41 to 46 cm. The average weight of this bird ranges from 46 to 95 grams.

On the other hand, the green heron has an average length of 41 to 46 cm, while the wingspan averages 64 to 68 cm in length. The average weight of a green heron is 240 grams or 8.5 pounds. This information is summarized in the table below:

Related:  How to Tame a Wild Bird

You can also differentiate between the two birds by the color of their plumage. The most obvious is the least bittern’s face and neck, which will show a yellowish-beige color. On the other hand, the green heron’s face and neck come with a chestnut tone. 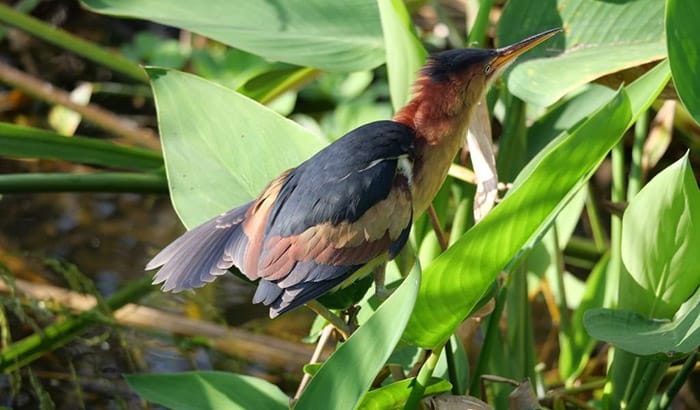 Both the least bittern and green heron do not have any difference in their physical features. In fact, both birds come with spear-shaped beaks, which will be used to hunt for food, especially striking fish and other critters.

In addition, both also come with long and S-shaped necks, but the green heron is a little bit longer. The neck of the green heron will fold to the shoulders as the birds crouch down low in wetland vegetation to look for their food.

It can be challenging to spot the least bittern because they usually live in freshwater, specifically brackish and freshwater marshes, which are far from human settlements. It will also not help that this type of bird is very secretive and is not comfortable near humans.

Another reason why it can be challenging to see the least bittern is the ability of its plumage to blend the color of the marsh vegetation they live in. They usually perch in a stand of cattails or the other reedy plants in their habitat.

On the other hand, the green heron can be easily spotted because they usually live in the city and suburban lakes, rivers, streams, and ponds. If the place comes with dense vegetation and trees, expect the green heron to be there.

In addition, the green heron also likes to live on vegetated ponds, even in the presence of humans. Like those ponds with pedestrian traffic, these birds do not mind getting near humans.

More or less, these two birds share the same type of both. But to be specific, the least bittern eats mainly on small fish such as perches, minnows, and sunfish. These birds also like to eat insects found in their habitats, such as dragonflies, leeches, and mice. They also do not mind eating snakes, tadpoles, frogs, and salamanders.

On the other hand, green herons’ diet consists mainly of fish. They like to devour small fish such as sunfish, minnows, and gizzard shad. They also want to eat aquatic insects, tadpoles, frogs, snakes, earthworms, and snails.

The least bittern will migrate north in areas where the frost usually prevails during the winter season. Then, in October, they will emigrate into the south with those birds coming from the west will usually go to Western Mexico and Costa Rica. Those eastern birds will likely go to the coast of the Gulf of Mexico and the West Indies.

On the other hand, green herons usually migrate in large flocks to the north in late winter or early spring. Then, they will migrate southward around August to October. Those birds coming to the east will migrate via Florida, while the western breeders will go to Mexico.

Comparing least bittern vs green heron can be difficult with all their similarities. However, certain features will let you distinguish between the two birds, particularly the size and the shade. There are also some differences in their physical features and habitat.