If you go to the western and northern portions of the United States, around Canada and Alaska you will most likely see two out of the three types of waxwing birds, Cedar (Bombycilla cedrorum) and Bohemian (Bombycilla garrulus) waxwings. Both birds are beautiful and almost look similar at first glance but if you look closely, the easiest way to tell them apart is by the colour of their chest and belly. Cedar waxwing has a brownish chest that fades into yellow down to their belly wherein the Bohemian waxwing has an ash grey from chest to belly.

Knowing where and when to look for these birds is the first important detail you should know about them because like most birds, both Cedar and Bohemian are nomadic. They go where the food is and would stay longer if there is enough food for them. According to a range map made by Cornell’s All About Birds, here is a comparison of Cedar and Bohemian waxwings’ movements throughout the year.

Bohemian waxwings spend summer and spring in high-altitude locations within the northwestern US, northern parts of Canada and Alaska. Most of the time Bohemian waxwings breed in the forests near a body of water like ponds, lakes, and streams.

Both the male and female waxwings collect twigs and other plants that could be used to build their nest but it is the female Bohemian waxwing’s job to weave the material together which usually takes her 3-5 days to complete.

Cedar waxwings on the other hand spend their summer breeding across Canada, some can be found all year round in the northern half of the US. They can be found in suburbs and parks but can also be seen in open woodlands and forest edges.

Most of the work in the building of their nest is done by the female Cedar waxwing which will take 5-6 days to be done, and the male waxwing is just in charge of some construction works for their second nest of the season. 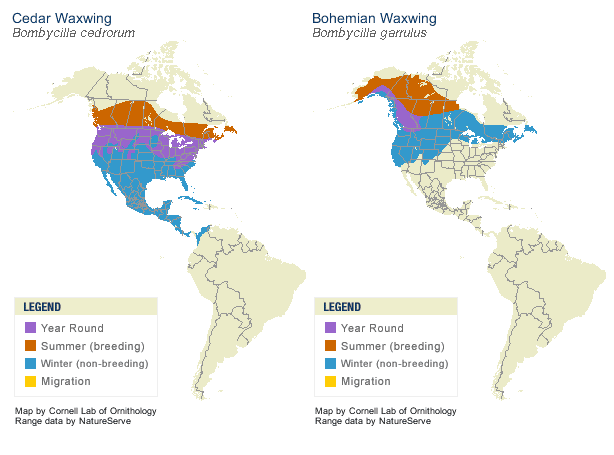 Looking at these birds from a distance, it would be hard to tell which waxwing is Cedar and which is Bohemian but if you know what you are looking for to differentiate these birds then it would be easier to set them apart.

Cedar Waxwing’s length ranges between 14-17 cm with roughly 32g in weight and a wingspan of 22-30 cm, it is a medium-sized bird with a sleek build and a short neck, they have broad and pointed wings with a tail that is short and squared-tipped. 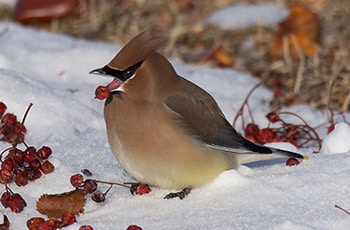 Related:  Why Do Birds Eat Rocks

Bohemian Waxwing’s colour pattern is more on the cool tone side, they are mainly colour ash grey with touches of orange, brown, and yellow on some parts. 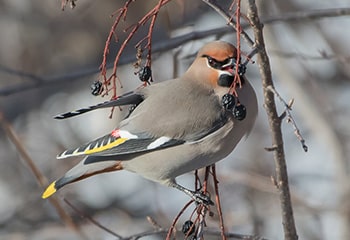 We hope that the next time you go out for birdwatching and come across these beautiful birds you now know when and where to look for them, which part of the location you should go and what to look for. In a flock of different birds, you should also now be able to easily identify which waxwings you are watching and what to expect from them.

It is also worth noting that if we all do our share in protecting these birds and nature in general, this beauty will continue and eventually protect us too.