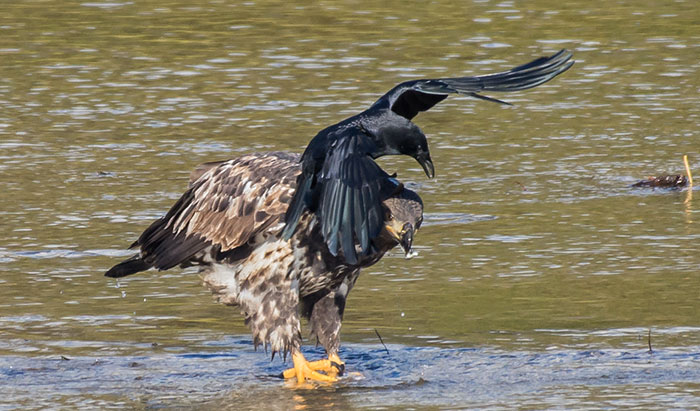 Crows can be both fascinating and a headache to bird watchers the moment they visit in the backyard. Unfortunately, these birds tend to overpower and dominate smaller birds and scare them away from your place.

But do crows attack other birds? Yes, crows have the tendency to attack and even kill other birds for various reasons. This bird species can even eat other birds if they want to. But what are the reasons for their attack? Please see the list below:

Protecting Their Territory and Resources

By nature, crows are very territorial. This trait of the crows is the primary reason it tends to attack other birds when it is needed. These birds are very protective of their young and their breeding territories. Once they feel that other birds are in the area, they will consider the unwanted visitors a potential threat which makes them attack aggressively.

When it comes to protecting their territory and even their resources, the crows are very brutal and can end up killing unwanted visitors. This bird species has the ability to attack other bigger birds by coming in a flock. No wonder a flock of crows is called “murder” by many bird enthusiasts.

Attacking Smaller Birds Out of Convenience

When a crow attacks smaller birds, it is usually out of convenience. When they see an injured small bird, they will likely attack and feed the helpless bird. The reason behind only attacking smaller birds is that crows are not built with sharp beaks or large talons, which are very useful when attacking large prey.

Crows will eat any bird smaller than them. These birds are known to be very intelligent, which means they will know if the possible prey can harm them once they attack. With their intelligence, they will also target large but easy-to-kill birds, but their preference is usually those birds smaller than them.

What they like is to dominate and attack those smaller birds that are defenseless and will not have the ability to fight back. Some common birds that the crows love to attack are sparrows, finches, canaries, and other common smaller birds.

Once they see a nest full of nestlings or baby birds, expect the crow to look for a perfect spot that will keep the bird from observing the nest. The spot can be a tree or a shrub where the bird can easily see the nest without being detected.

Once the parent birds leave the nest to look for food, Expect the crow to immediately attack the defenseless nestlings and baby birds immediately. They will probably pick up the nestlings and bring them somewhere where the bird can easily eat the weak little bird.

Related:  Why Do Birds Puff Up

We all know how protective hens are with their young, so they will likely fight back once attacked by crows. The crow will probably think twice about attacking the hen in this situation. Crows are very clever and intelligent, which means they know if an attack can be dangerous to them.

Why Do Crows Attack Hawks

As you already know in the earlier part of this article, crows love to dominate other birds. They will only attack other birds once they understand that the target will not fight back or be defenseless the moment they attack the prey. After all, crows love to attack smaller birds that seem to bring no threat during their attack.

But, there will be moments when a flock of crows will be forced to attack a larger and more dangerous hawk? But why is that? Hawks are similar to crows, which predators will love to attack and eat other birds if given the opportunity.

And one possible target of hawks is those baby crows which are being protected by their parents. The moment the parent crows sense the presence of a hawk in their territory, they will try to defend their young in any way they can.

Related:  Why Do Birds Sleep on One Leg

Since hawks are usually bigger, the crows will ask for the help of the other crows present in the territory and fight back and protect their place in the flock. Expect a flock of crows attacking the much larger hawk. Yes, the size of the hawk can be an advantage, but an attack by a flock of crows can be overwhelming and might scare the hawk away from the crow’s territory.

Do crows attack other birds? Yes, crows have the tendency to attack other birds because they are predators to other smaller and common birds. Crows like to dominate and attack smaller birds which they feel are not a threat and will not fight back during the attack. However, crows can also be attacked by larger birds such as the hawk. Crows can fight back in a flock and overwhelm the much-larger hawk through their numbers.

1 thought on “Do Crows Attack Other Birds”