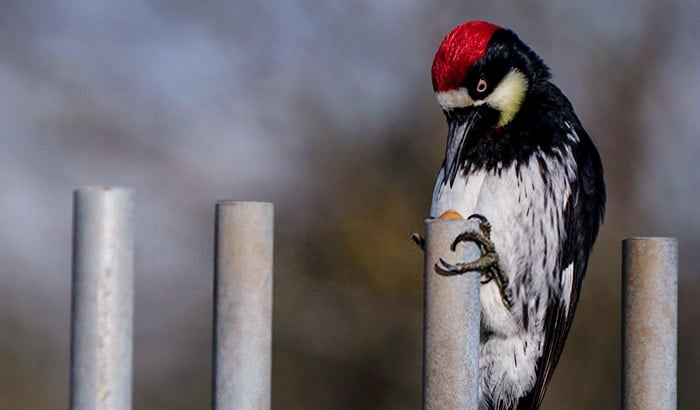 I think every bird watcher will agree with me that a woodpecker is one of the most anticipated birds to watch in the backyard. I mean, everybody loves watching woodpeckers, and its uniqueness is different from the other birds that visit my backyard. The way they make their presence known by hammering and banging just to get other’s attention is so fun to watch.

But have you seen these birds pecking on metal objects? Do you wonder why do woodpeckers peck on metal? Woodpeckers are known for being resourceful and entertaining, especially when they tap on trees. But when they are pecking metal lamp posts and even satellite receiver, it can be strange and sometimes annoying. In this article, you will find out why the woodpecker will also peck on metal apart from trees.

Woodpeckers are naturally made to peck. In fact, the head and neck of these birds are protected from trauma. The woodpecker’s brain is also cushioned from the effects of the continued movements when pecking on trees. In addition, the bird’s beak is pointy, which is very unusual and compact compared to regular birds. The structure of the beak is used to fully benefit them when looking for food or a mate.

Pecking is a natural behavior of these birds as they use it mainly to search for their foods. You can usually see them in trees where they can pierce a tree’s bark to get their food which is generally larvae or insects. Apart from looking for food, their pecking abilities are also used to create their nesting site, which is actually understandable.

Apart from pecking, there is also another skill that this bird has used its pecking motion ability. Instead of singing a song, these birds will also bang on trees using their bills to create drumming sounds. So unlike other birds that produce a distinctive song, the bird uses it to communicate their way to do something.

While it is normal for woodpeckers to drum on trees, the problem starts when doing this action is done outside the trees, particularly on metal objects. It creates an annoying sound that might disturb or irritate humans and other animals nearby. But have you ever wonder why the woodpecker is doing the drumming thing? Here are two main reasons why woodpecker pecks on metal.

Establishing its Territory to Alert Predators

Woodpeckers tend to peck metals to produce a sound that will let them established their territory to protect them from potential predators. The sound that it produces should be enough to make potential animal threats to be intimidated and will eventually discourage them from targeting the woodpecker. After, the sounds produced in pecking metal objects will be heard in a long distance.

But why do they peck on metals? In establishing their territory, they need to drum as loud as possible. And the only way to do it is to bang on metal objects which are very clever. But this is actually not surprising since woodpeckers are one of the most intelligent birds you can find in your backyard.

To Attract a Mate 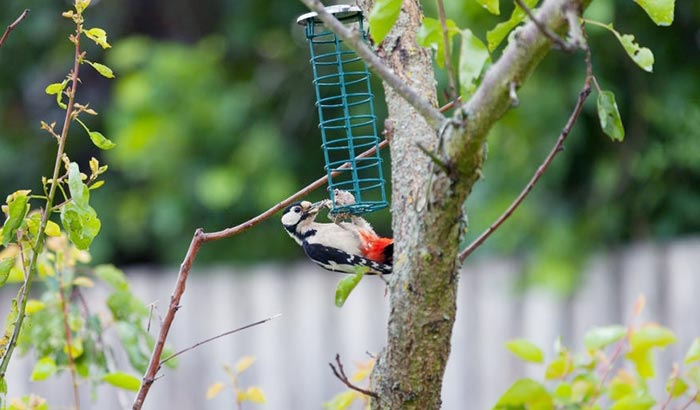 As I have said earlier, woodpeckers are intelligent animals, meaning they can choose the noisiest object they can tap on. While others contend in pecking trees, there are others that have the uncanny ability to find something louder than the trees, such as metal objects. An example was the TV antenna which was discovered by woodpeckers years ago but has since been replaced by the satellite dish as the woodpecker’s favorite.

The communication between both sexes of woodpeckers is their own way of communicating with each other. As we all know, woodpeckers do not produce songs, but their drumming is their form of communication. And guess what they are using to produce the loudest sounds possible? Of course, it is metal. It should also be interesting to note that the more distinct the drumming of the male woodpeckers is, the more effective it is to attract made or pushing away potential predators.

In addition, woodpeckers are natural peckers will they just drum to any surface apart from trees or metal objects. If you feel that they can produce a loud sound when drumming on metal objects, what’s more with other surfaces, especially those loud ones. I have personally witnessed the birds pecking on window panes which produced a very loud noise that can be annoying to homeowners.

The next time you see these birds pecking on metal objects, you will no longer be surprised why woodpeckers peck on metal. It is actually part of their living when they do such things since this bird species is one of the most intelligent birds you can ever meet. When a woodpecker is drumming on the surface of a metal object, it is either they are communicating and finding their future made or just establishing their territory to protect them from potential predators.

Sometimes, woodpeckers can be annoying in drumming those metal objects, and we often do things that will deter them from doing so. Unfortunately, these birds are one of the most determined birds, meaning, whatever methods we use to shy them away, it will not work for a long time. The best thing to do is to understand them while also allowing them to do this vice since it is part of their daily living.