What does it mean when you find a dead bird? A dead bird can mean different things depending on who you ask. There are quite a lot of symbolic meanings for this morbid sight, and they are usually cautionary tales. So, what does a dead bird mean? Symbolically, of course.

Many sayings involve dead birds that come from different cultures from all over the world. In this article, you will be learning about the different sayings about dead birds and all their potential meanings.

Dead Bird: What Does It Mean?

When they are alive, birds are quite magnificent creatures. Often, people regard birds as symbols of freedom, peace, and hope. However, a dead bird brings the opposite message.

Many cultures consider dead birds as symbols of discontent, failure, grief, and hopelessness. When you see a dead bird, it might signify that there will be a significant change in your life. However, this change does not necessarily need to be negative. The location of the expired bird can change the meaning of the symbolism quite a lot.

In addition, dead birds can also be a warning of real dangers. It would be like the saying, “canary in a coal mine”.

Other Common Meanings of Dead Birds

The following are just some of the more common meanings that people place on dead birds.

You will usually find birds suddenly dropping dead from the sky. This often happens in cities where the air pollution is quite high. Birds are very sensitive when it comes to noxious fumes, which is why in the old days, they would bring canaries into coal mines to warn the men if there was a toxic fume leak.

If the canary suddenly dies, this is a warning for the miners to evacuate. This is where the saying “canary in a coal mine” came from.

One of the most extreme examples of dead birds falling from the sky due to the extreme toxicity of the air was recorded in Chernobyl. It was right after the failure of the nuclear power plant.

Almost 40% of the adult bird population in the country suddenly died.

In addition, throughout history, different cultures from all over the world believed dead birds as signs of danger. In some ancient cultures, dead birds meant that the person who saw them did something wrong. It is also an omen of impending misfortune.

Dead birds, to ancient civilizations and a few cultures today, are signs that the gods have turned their backs on them for something that they did. 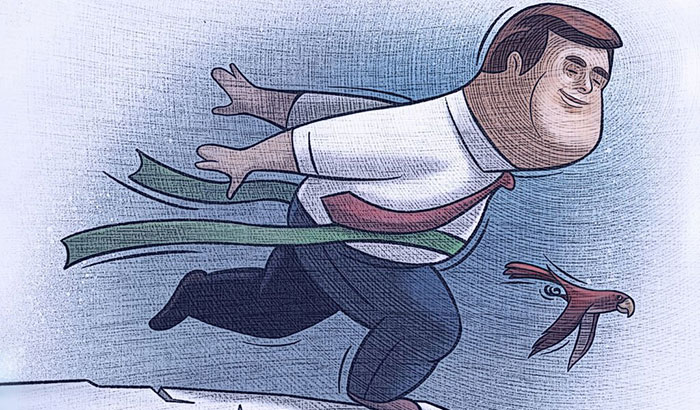 It is not necessarily a bad sign to see a dead bird. Ironically, a lifeless avian can also symbolize the process of rebirth.

In Indian mythology, and some pieces of Christian art, a dead bird is representative of a saved soul. It is a soul freed from its sins and will eventually be reborn.

This symbolism of rebirth as it pertains to dead birds may indeed seem counter-intuitive. However, it does have positive implications. For instance, in tarot cards, the dead bird can signify that the person is in the process of starting anew.

In Native American cultures, the people place high regard on eagles. So, when they find a dead eagle, they will hold a special ceremony to celebrate the bird’s life and give it a dignified burial. They believe that this ritual can help guide the eagle towards the path of rebirth and give it a new beginning.

Death is probably the most obvious symbolism attached to seeing a dead bird. All people have a natural fear of death. However, the truth remains that it is an inevitable fact that no one can avoid.

The reason is every living creature will eventually die.

Dead birds are constant reminders for all people that every one of us is facing death. It does not matter what age you are. Death can come for you at any time.

Normally, birds have strong associations with freedom due to their ability (well, most of them) to fly and cover large areas in a short time. So, finding a dead one can make you feel a bit brokenhearted. However, it also serves as a reminder that death will come for us all eventually, and it is something that we need to accept.

Failed Dreams or Failure in General

Because birds soar high in the sky, people have always associated them with their wildest and fondest dreams. When a bird dies, people also attach its death to the death of their aspirations.

A dead bird might be an indication that you should just give up on your current dream and that you should start over again. If you are feeling like you are not going anywhere with your dreams, this might be a sign that you are chasing after the wrong thing.

So, a dead bird might seem like a negative message at the moment. However, if you can look at it from another point of view, it can also be a sign of more promising times soon.

In addition, you might also relate the sighting of a dead bird to your recent failures. For instance, did you just get fired from your job? Or did your relationship fall apart? If you see a dead bird right after or before a negative event happens, you might believe that the bird was an omen of things to come.

What Does a Dead Bird Symbolize in Your Dreams?

For instance, did you dream about a dead bird suddenly falling from the sky? It could mean that there is something big that is going to happen in your life that you still have not noticed yet.

If you saw a bird that is on the brink of death in your dreams, it might be your unconscious trying to remind you of something. It might be that you are running out of time to do something important.

On the other hand, if you dreamt about a dead bird coming back to life, it might mean that you will have an opportunity to correct any mistakes you committed in the past.

Sometimes, the answer to the question “what does a dead bird mean?” is not that trivial. However, if you are a spiritual person, you may relate it to whatever might be happening in your life.

The supposed meanings mentioned above came from different cultures and you are free to believe in them or not. However, there is nothing wrong with finding meaning in seemingly mundane things, especially if it helps you cope with whatever burden you are carrying.