A lot of bird species look very similar to other bird species. But when it comes to the pine siskin and house finch species, the similarities are incredibly striking. But, with a few guidelines on the differences between the two, anyone will be able to tell the two types of birds apart. On this pine siskin vs. house finch comparison, I will discuss their slight differences in size, color, shape, flight, behavior, and more.

Here’s a tabled list of their differences to help you determine the differences between the two birds.

Let’s begin by examining the sizes of the two bird species. Pine siskins grow to an average of 4 to 5.5 inches in length. They weigh from 12 to 18 grams, and their wingspan ranges from 7 to 8.7 inches wide.

House finches are very slightly bigger than pine siskins in general. They grow to around 5.1 to 5.5 inches long, and their wingspans range from 7.9 inches to 9.8 inches. And they weigh 16 to 27 grams on average.

It can still be challenging to tell pine siskins and house finches apart, judging by their size alone. So we must move on to other categories of comparison.

The color variations between the two birds yield more distinct differences. Pine siskins are the least colorful of all other finches; it is brown and streaked (light brown streaked with dark brown). Its breast and throat are predominantly white but with brown streaks. And its head is filled with concentrated dark brown feathers.

But its most distinct and identifying color is the yellow accent on the edge of its wings and tail. The yellow markings on its wings and tail are most visible when the bird is in flight. They also display their yellow bands when seeking a mate. The yellow line indicates the hierarchal rank of the bird among its fellows.

The house finch has a very unique color – especially the males. The male house finch molts its feathers two times a year at most. And when it molts, its color also changes based on its diet. The possible colors of a house finch can be red, orange, or even yellow.

The male house finch has a light red face and breast. Its crown, forehead, and throat are red. The females are gray with brown streaks across their bodies. They have no distinct markings. 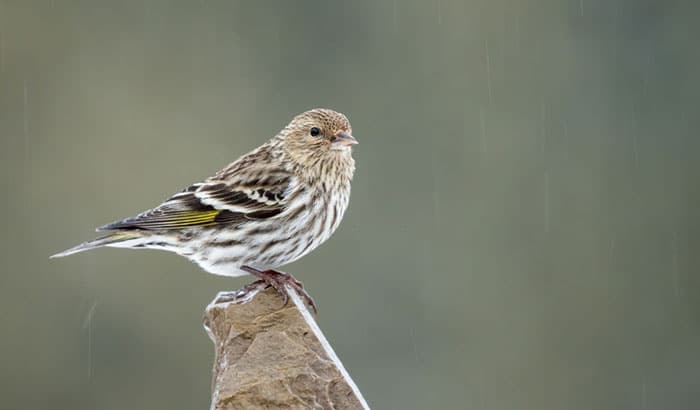 As I already mentioned above, you will see the yellow bands on the wings and tail of the siskin pine when it flies. But there is another identifying trait of the siskin when in flight: its tail is forked.

Additionally, the flight of the pine siskin is very smooth. It will beat its wings rapidly then glide with the wings outstretched.

On the other hand, house finches fly swiftly. They also beat their wings rapidly and glide with wings outstretched, but they spend more time beating their wings than pine siskins do.

While both birds have brown eyes, the house finch has very deep brown eyes – almost black. Also, the house finch looks more rounded in its overall shape than the pine siskin. So, even if the two birds are very similar in size, their shape is not.

Even outside of the breeding season, pine siskins can be highly territorial and aggressive. They forage in very tight flocks, and if another flock goes near their food source, they become noisy and threatening.

On the other hand, house finches are significantly calmer. They also stay in flocks, but their groups are smaller than a flock of pine siskins. One way to describe house finches is that they are friendly.

So, pine siskin vs. house finch – how do you tell them apart. For me, the most effective method is by looking at their colors, other physical traits, and behavior. The two birds are very similar in size and flight pattern; it’s hard to tell them apart through those means.