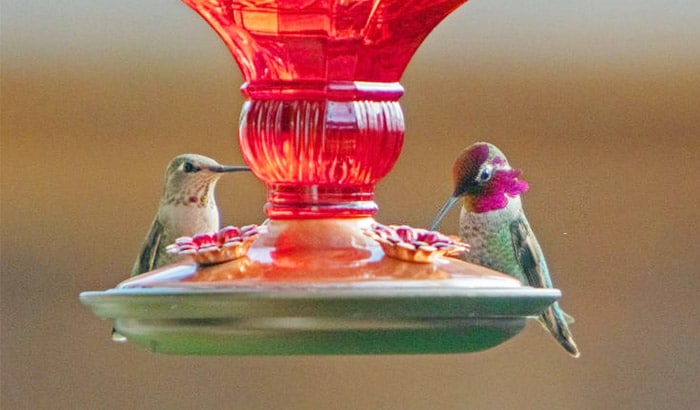 I put their differences on a table so you can better compare them.

Because the differences in male and female hummingbirds are in their appearance, size, and behavior, those will be the categories we will examine.

In the animal kingdom, the males are often the more extravagant in appearance; the male lion has the mane, the male elephant has the trunk, etc. You can see this trend more pronouncedly among birds. The male peacock, for example, has the more colorful tail feathers. The same is true of the hummingbirds.

Male hummingbirds have more colorful feathers than their female counterparts. Male and female hummingbirds look so different as the males will always have very bright feathers while the females look duller in color.

Aside from the general color, male hummingbirds have a distinct look around their throats, known as their gorget in the scientific avian world. Their throats are shimmery and iridescent, which means that the color seems to change depending on the angle that you look. Female hummingbirds, on the other hand, have very plain throats.

The gorget of male hummingbirds refract, or bend, light. The color can be orange, red, purple, blue, or pink. The male can also make their gorget look black to avoid getting the attention of predators. If you see any of these colors on a hummingbird’s throat, it is a mature male hummingbird. Females, on the other hand, often are colored brown or dull green.

Let’s look at one example. The ruby-throated hummingbird is one of the most common hummingbird species in North America. The species got its name because of the distinct color of the male’s throat; the males have a ruby-colored throat while the females have white throats. In different lightings, the male throat can appear red, pink, and even purple. 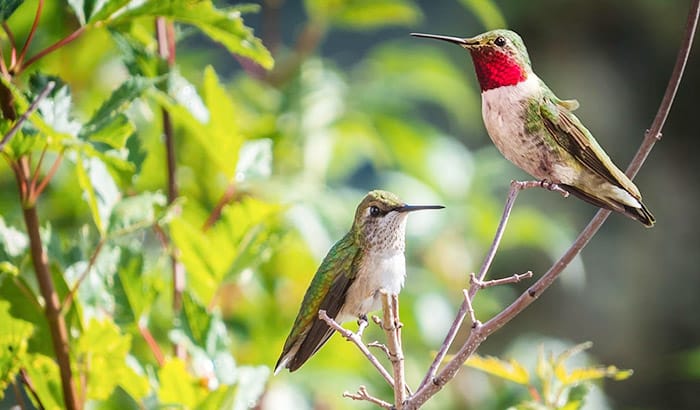 Female hummingbirds are larger than males of the same age and species. The weight of females ranges from 2.4 to 4.5 grams while males go from 2.4 to 3.6 grams only.

The difference in size is an evolutionary trait developed due to their different breeding roles. Because the females have to lay eggs, they need to have bigger bodies to do so. Additionally, females sit on top of their eggs; their bodies need to be big enough to cover their eggs and provide warmth.

Another behavioral difference between the two genders is that male hummingbirds migrate first before females. They will fly to the breeding ground earlier to establish their territory before the females arrive.

In terms of breeding, males are a lot more proactive than females. The males are noisier and move a lot more. Once the male finds a female to mate with, he will dance. After the mating process, all the action will shift towards the females. The female singlehandedly takes care of her offspring. She builds the nest and chases away any male who ventures near her nest because the brightly colored male will attract predators.