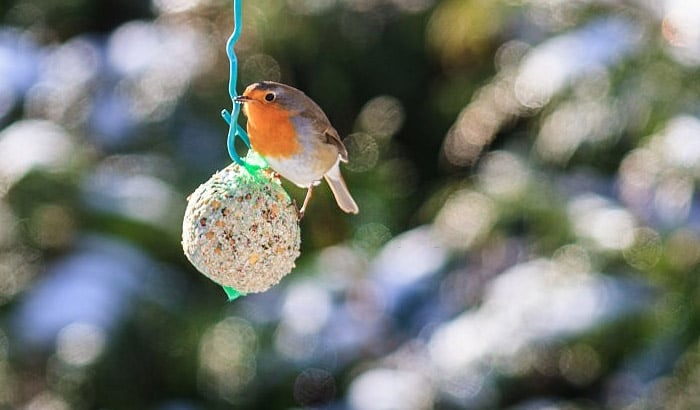 There are many ways to make food for the birds visiting in your backyard. But most of the birders just buy bird seeds and put them directly into the bird feeder. However, there are other ways to present the birdseed to your bird, such as making it as seed balls. The traditional birdseed balls are usually mixed with lard as the primary ingredients, along with the others, to make nutritious seed balls for the bird.

However, is there any alternative for lard as the fatty catalyst in making seed balls? If there is any, how to make bird seed balls without lard? These are just common questions we usually get from birders looking for ways to make seed balls without using the lard. In this article, we feature two alternatives for lard which are peanut butter and suet. These two main components will be used as we present different recipes for making seed balls for the birds.

It is so important to look for the birds during the winter as they are helping in managing the pest in the garden. But they need help during the winter months, especially with their food. Wild birds need fats and carbohydrates so they will have the energy to go long flights to finds food and their mates. The extra fats in their bodies will also give an extra layer to their tiny bodies during the cold season.

Related:  How to Attract Painted Buntings

The first recipe uses vegetable suet as the primary source of fat of the seed balls. It also needs bird seeds as the other ingredient. You will also need a cooking pan, mixing bowl, and stirring spoon for this recipe. The quantity of the ingredients will depend on you, but it should be one part vegetable suet and two parts bird seeds.

The first thing to do is put the vegetable suet and the bird seeds in a separate mixing bowl.

Then, prepare the cooking pan and make it ready under low-level heat. Put the vegetable suet on the pan while stirring it slowly a little at a time until you achieve thick consistency. You can add the seeds slowly while constantly stirring until the mixture gets the desired consistency.

After that, wait for it to cool down either on the fridge or just on the side. Once it is completely solidified all the way through, you can use a fork to crumble it up first before making the balls with your hands.

After crumbling the mixture, you can start forming the seed balls with your hands but make sure it is clean before doing it. You can put the formed seed balls on a clean plate. Repeat the process until all the mixture is finished. You can also put balls on the fridge for a little while to make them firm before putting them on the bird feeder.

Related:  The Best Squirrel Feeders for 2022

Should you need to feed the birds, you can put the seed balls on the bird feeder and hand them to their exact location. Wait for the birds to consume everything before properly replenishing it with the other seed balls. 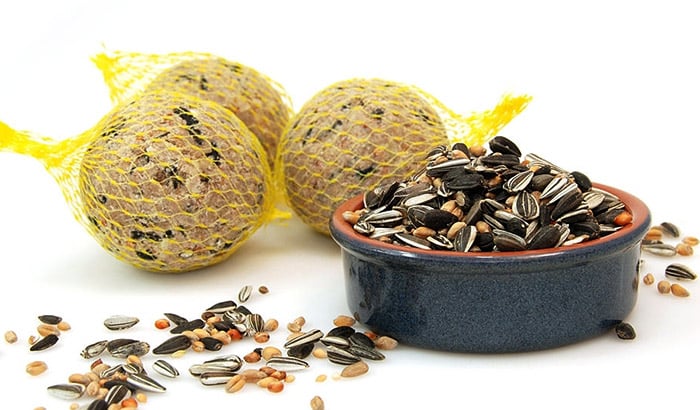 The next recipe is again will be using suet instead of the traditional lard as the source of fat. However, we will be adding an additional fat source which is peanut butter. For the exact measurement, you will need 1 ½ cup suet, 1 cup peanut butter, 1 ½cup bird seeds, 1 cup rolled oats, and 1 cup cornmeal.

After that, you can add the rolled oats, cornmeal, and bird seeds to the mixture. Again, slowly stir all the ingredients together until they are properly mixed.

The next step after combining the ingredients is to refrigerate until such time that it starts to get thicker or harder inside. You can check after an hour of putting the fridge and see if it is firm enough in holding the structure. Once it is perfect, you will need to start making the seed balls.

When forming the balls, start by sprinkling some bird seeds on a clean plate. You can start forming and rolling the seed balls using your bare hands but make sure that your hands are clean before doing it. Once the balls are created, you can roll them in the place with the bird seeds to coat the outside of the seed balls. Then put the finished product on another clean plate.

Once you finished forming all the balls. You can refrigerate it until the balls, specifically the peanut butter, are hardened. You may check it from time to time. Then, if you are ready to feed the birds, just simply put the seed balls on the bird feeder.

The traditional birdseed balls use lard as the primary source of fat for the birds. But there are other alternatives such as suet and peanut butter which are also good sources of fats. For a birder like you, learning how to make bird seed balls without lard is excellent knowledge to have. Having this skill will give you the chance to provide the birds with a different variety of foods that can be used during the cold or even the sunny season.

1 thought on “How to Make Bird Seed Balls Without Lard”