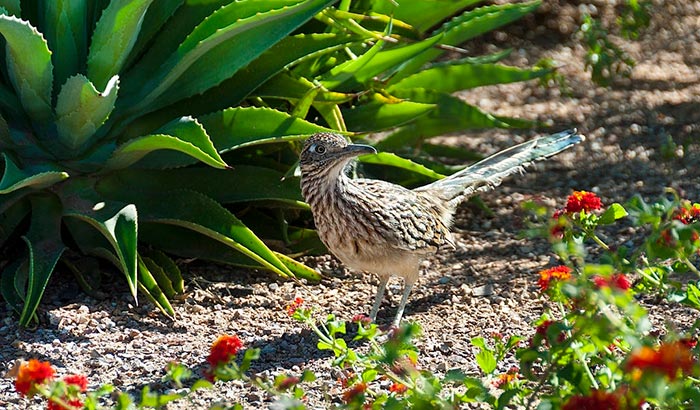 Do you remember Roadrunner of Looney Tunes that frustrated Coyote to catch him? Well, this fearless bird is so amazing for his courage, endurance, and speed. And you can see him right in your yard.

Roadrunners are referred to as chaparral cocks that are birds born to run. They are fast-running ground birds with long tails and a bushy blue-black crest. They also have speckled plumage that can camouflage with dusty shrubs.

Indeed, you do not need to run and catch this playful bird. You can attract and see them in your yard. In this article, we will share with you some facts about how to attract roadrunners to your yard. You may read further below.

Where Do Roadrunners Live

Roadrunners live in Mexico and southwestern and south-central the United States such as Oklahoma, Texas, Arizona, southern California, and New Mexico. They flock in the desert, especially in the natural desert scrub land or chaparral.

The Desert USA stated that roadrunners settle in an open, rolling, or flat terrain with a dispersed cover of chaparral, dry bush, or desert scrub. They do not stay in wide-open spaces and prefer more cover.

This is because they can hide from their predators in the patches of scrub. Also, they can run at a greater speed in the thickets or groves.

These birds also nest on platforms in woods, groves, or thickets. You may also see them on grasslands or sitting on fences.

Related:  How to Keep Away Mockingbirds: Simple Tips You Can Try

According to Avian Web, roadrunners eat what is available because they are opportunistic. They are also omnivores in which they can eat both animals and plants.

Among the animals they eat are scorpions, grasshoppers, crickets, rodents, small birds, tarantulas, insects, snails, snails, lizards, and centipedes. They also eat eggs and rattlesnakes. If they want to eat rattlesnakes, the roadrunners team up and peck the head of the rattlesnake until they kill it.

The plants and fruits they eat include sumac, cactus fruit, pear cactus, seeds, and other fruits. Some people see road runners on ditches drinking water. . However, other people say they do not need water. They say they get their water on the food they eat.

How to Attract Roadrunners 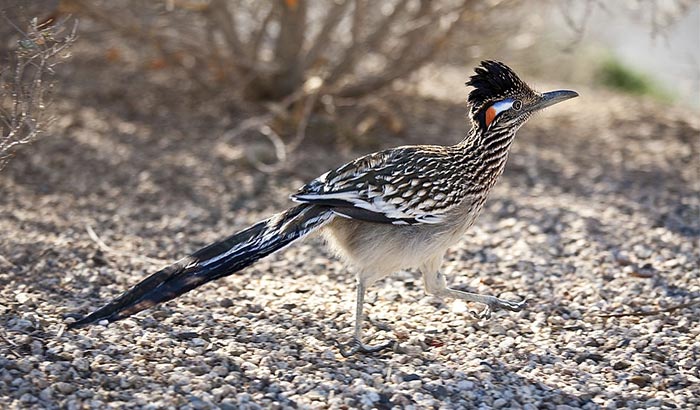 You may place rocks in your yard or garden. Or you may make rock beds. Animals such as lizards, scorpions, and centipedes like to roam and stay in rocks.

The roadrunners are also found in the desert. That is why they like desert plants. You may plant cacti, prickly pear, or other desert plants in your garden.

These birds make their nests about three or more feet above the ground in a cactus plant. They also like to eat the seeds and fruits of prickly pear and some desert plants.

Related:  How to Make Bird Seed Balls Without Lard

Place sandy soil in your yard

You may put sandy soil in your yard just like a scrubby. Most roadrunners like to settle in this desert-like habitat. Also, put some plants that can adapt to heat or some desert plants mentioned above.

Plants that they like to settle include short trees and bushes. You may plant these in your yard. Besides, the insects are attracted to bushes and trees. And roadrunners like to eat insects such as grasshoppers, crickets, and spiders, among others.

Avoid cats in your garden

One of the enemies of roadrunners is cats besides owls, snakes, and coyotes. Avoid having house pets such as cats. Or never put cats in your yard because they might run after roadrunners.

A male roadrunner makes a unique coo-coo call in a series of 3 to 8 downward notes to attract a female roadrunner. The coo can be heard at the beginning of sunrise and about a quarter-mile away.

The roadrunners are fun to look at with their funny appearance. Besides, I always remember this slender, blue, and purple bird in the Looney Tunes whenever I see them. It is delightful to see roadrunners. Never miss them in your yard.

For them to draw into your yard, you may follow any of the ways mentioned in this article on how to attract roadrunners to your yard. Indeed, you will see them herding and even nesting in your yard.

Related:  How to Attract Goldfinches

If you have any idea on how to attract these charismatic birds, you may share them in the comment box below. We appreciate your help and suggestions.