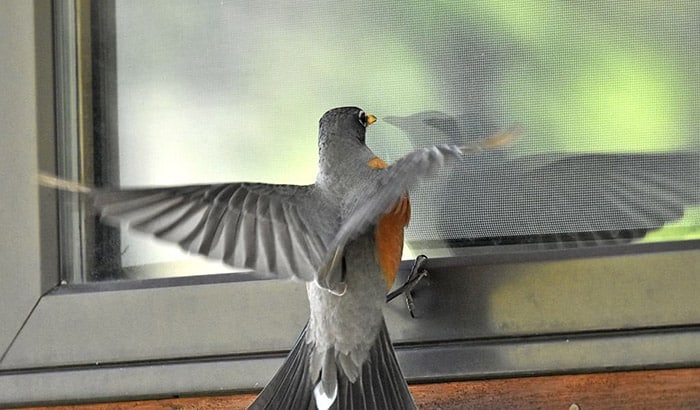 Many people are annoyed to see birds pecking at the windows of their house. But so many of them are wondering why do birds peck at windows and usually find it irritating when it happens.

Please note that it is normal for this situation to occur during the mating season. Accordingly, there are no scientific-based reasons for this behavior to occur, particularly during the breeding season.

But in theory, the birds sometimes attack windows, especially with tinted glass, because they think that their own reflection is a rival for their territory. The birds will try to lure their supposed-to-be rival away through pecking.

This situation is also the reason why do woodpeckers peck houses but may also happen to other bird species. The good thing about it is that there are things that you can do to stop the bird or prevent the action from happening. These actions can also help prevent the birds from sustaining an injury from the attack.

How to Stop Birds from Pecking House

If you want to stop the birds from pecking in the windows of your house, there are things that you can do to stop them. Please check some of the methods below:

Changing the Lighting Situation in the House

The initial step is to check the lighting situation outside your house. What I am talking about is your home’s light and shade situation. If it comes with bright lights and shade, it is probably the reason why the birds are pecking through the windows.

To correct this situation, you need to change the light and shade in the house. You can try to add some shade or trim some foliage to remove any forms of reflection found on the windows.

The initial thing to do is block the path by placing anything that will prevent the bird from using the path again. You can hang baskets or place hanging potted plants at the front side of your windows.

If your window comes with a blind, you can immediately close it if the birds start attacking again. This action will eliminate the flight path and possibly prevent the bird from attacking the windows again.

Another way is to temporarily put a piece of cloth, preferably a curtain, fabric, or towel, at the outside surface of the window. The aim is to reduce the bird’s interest from pecking in the window. Remove the cloth you put on once the bird has already stopped pecking at the window.

Sometimes, our creativity can be used to prevent the birds from attacking in the windows. You can use your full imagination in finding ways to make the birds scared and prevent them from coming back in the window.

Why do birds peck at windows? For the simple reason that they think that the reflection of their image is a competitor of their territory. Constant pecking of these birds is annoying but can be stopped using the method we have presented above. It is also a must to prevent the birds from doing it again to prevent any injury through constant pecking.