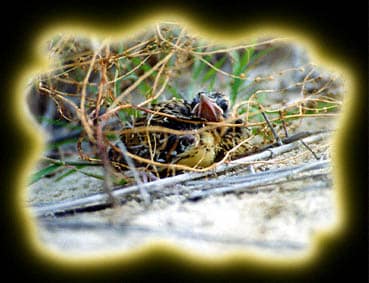 The Eastern Meadowlark has a bright yellow breast adorned with a distinct broad black necklace (in the shape of a V), short tails and short rounded wings, white outer tail feathers, long starling-like bills, and brown-streaked backs. The female resembles the male, but is smaller. This bird is anywhere from 8 1/2-11″ in length with a wingspread of 13 1/2-17″. These birds are chunky, ground-dwelling birds and can be found in grasslands, pastures and prairies, but the population has been reduced due to urban areas, and reservoirs.

Eastern Meadowlarks are not larks, as their name implies, and are not “big little starlings” as the scientific name, Sturnella magna, suggests. They are part of the group known as the “Blackbirds” which include the cowbirds, grackles, Red-winged Blackbird and others such as the orioles which are also non-black blackbirds.

In spring, the male will flaunt his colors and sing from the top of a fence post to let others know it is his territory and warns other males to stay away from the females in the area. Their territorial size ranges from 3-15 acres.

The song of the Eastern Meadowlark is a whistling see-you-see-yer or putting words to it would sound like “spring is here” which they sing while perched on a fence post, tree, pole or on the ground. They utter harsh alarming notes to proclaim their territory.

The Eastern Meadowlark is wide-spread in the eastern US and south-eastern Canada extending as far west as Arizona. It is also resident in the Bahamas and extends south to Mexico.

In spring, the male arrives first to the nesting grounds and establishes his territory. The females arrive approximately 7-14 days after. The male’s success depends on the territory and his song. Males are polygamous and defend their territory which is large enough for two or three mates. The female builds the nest which is constructed of dried grasses, pine needles, horsehair, and plant stems. The nest is domed shaped with the entrance on the side and built on the ground in meadows, corn fields or weedy orchards. Throughout the months of April to August, 4-5 eggs are laid which are white with dark brown to purple speckles. The female incubates the eggs which takes anywhere from 13-14 days and broods the young. Both parents feed the young, but the male usually brings the food and give it to the female who passes it on to the young. The first young will leave the nest within 11-12 days.

This bird’s diet consists of about 70-75% insects such as grasshoppers, crickets, beetles, ants, spiders, and wasps. They walk around on the ground in grassy, weedy and roadsides looking for insects. In winter, they eat grains and weed seeds.