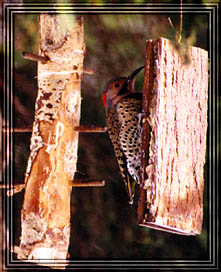 The Northern Flicker (or Yellow-shafted Flicker) measures 12 1/2″-14″ with a wingspan of 18 1/2″-21″. The flickers feet are short with two toes in front and two toes behind. The bill is slightly arched that is strong and nearly as long as the head. Upper part of the head and hind neck light purplish-grey. Both sexes have a red crescent on the back of the head. The upper parts are brown, barred with black, a black crescent across the upper breast with numerous round black spots on on the sides, lower breast and belly. The rest of the breast is a reddish-white color spotted with black. The male has a black streak along each side of the throat. Under surface of the wings and tail are a rich yellow.

The female lacks the black streaks on the throat and the black crescent on the breast is smaller. She is somewhat duller and is nearly the same size as the male.

The flight of this species is strong and performed in a straighter manner than that of any other woodpeckers. Their migrations, although partial, many remain even in the severest winters, are performed at night

When passing from one tree to another on wing, they also fly in a straight line, until within a few yards of the spot on which they intend to land, they suddenly raise themselves a few feet, and fasten themselves to the bark of the trunk by their claws and tail. The Northern Flicker easily moves sideways on a small branch, keeping itself erect, head upwards and tail pressed against the bard for support. On the ground, where is lands frequently, it hops.

The song of the Northern Flicker is a loud wick wick wick wick or a squeaky flick-a, flick-a as in it’s name. Spring arrival is announced by a loud, far-reaching sound with the long continuous roll of the flicker’s drumming in the early morning, a preliminary of the courtship.

Courtship of the Northern Flicker is noisy and lively as three or more birds of both sexes perform a comical dancing, nodding and bowing or chase each other around or through branches of a tree. The male and female face each other on a branch and spread their tails jerking their heads in a weaving motion and frequently uttering a wick-up or wake-up call.

The nest site is a cavity (an existing one or newly excavated) in a tree or stump. Both male and female work anywhere from 1-3 weeks excavating. Tell-tell signs are usually chips at the base of the tree or at some small distance from the nest tree. The nest is anywhere from 2-60 feet above ground and the nest has no nesting materials but the chips are left at the bottom of the hole to make a soft bed.

The average number of eggs consists of 5-7 and are a glossy white color, translucent shell giving it a delicate pinkish glow. They size and shape vary, but normally are ovate. Incubation is performed by both sexes and lasts anywhere from 12-13 days with young leaving nest 25-28 days after hatching.

On the ground, where it frequently lands, it hops with great ease. The flicker does this to pick up beetles, caterpillars, or to examine the dead roots of trees, or the side of a log, from which it procures ants and other small insects. The Northern Flicker is also fond of various fruits and berries such as apples, grapes, persimmons and dogwood berries, pokeberries and huckleberries. During winter it frequents suet feeders.